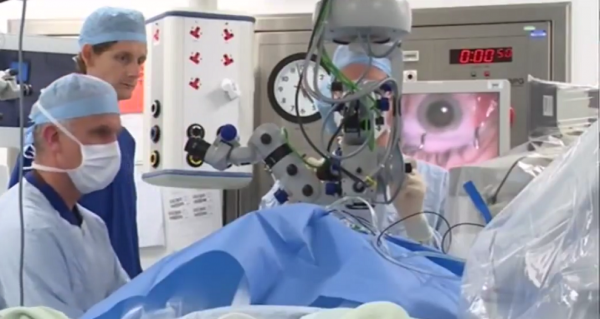 Oxford University specialists announced the successful completion of clinical studies with the participation of their development called Robotic Retinal Dissection Device (R2D2). They tell this robot is able “to revolutionize” the ophthalmology sphere.

The development was running still 2011, the first trial was conducted by professor Robert McLaren during the ophthalmologic surgery. A membrane 0.01 mm thick was removed from patient’s retina through robot’s help. The operation was well-turned; patient’s vision was recovered without any complications. To comprehend, what was the operation itself – imagine you control the blade inside someone’s retina with simple joystick and touchscreen.

Robots are particularly implemented in small areas of surgery. In case of eye surgery – even a tiny quiver of hand will cause critical consequences such as – nerve or retina’s damage. But implementing R2D2 will reduce such risk to the minimum because its mechanism is not affected by this issue.

At this moment, doctors set up this robot for additional stage of trials. This time R2D2 will perform the injection with a needle placed under the retina. All the participants of this study will be chosen from volunteers well-informed about all details of the oncoming operation.

bioequivalenceClinical trials in the CISfeasibilitymonitoringRadiopharmaceuticals
Can a demand for organ transplants overweigh fears?